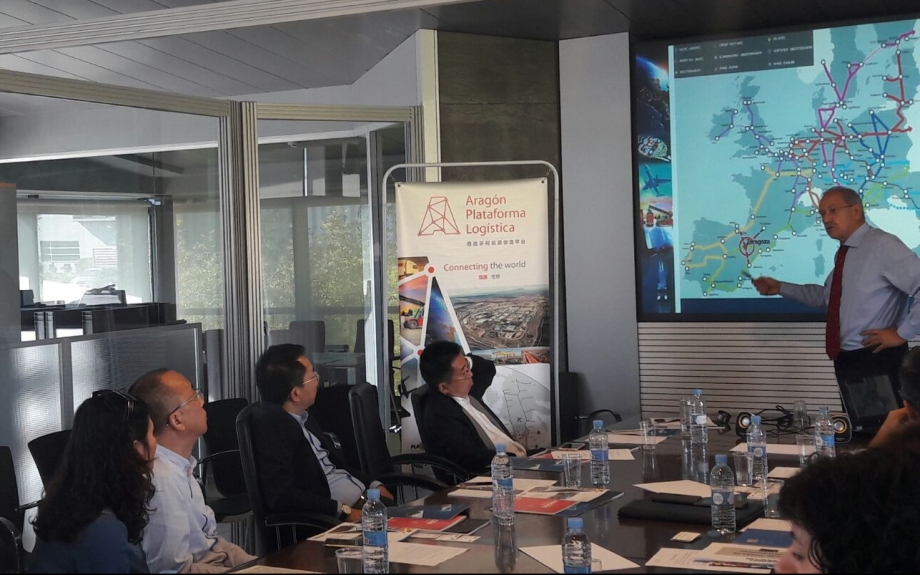 The APL management are working on opening other railway lines for the transport of merchandise through Europe to China and show their potential to a public delegation from that country, as it received the Chengdu International Railway Port authorities.

Aragón wants to be play a full role in railway communications with China, known as the Silk Road, whose long journey takes it to the Mediterranean and central and eastern Europe, priority destinations for regional exports. This weekend, the Aragón Logistics Platforms (APL) management received the Chengdu International Railway Port authorities, responsible for a dry port and terminal, from which a thousand freight trains cross through Europe each year. Francisco de la Fuente, APL manager, and other members of his team, met management from this Chinese public terminal and senior officials of their Government in Plaza. They were interested in finding out the options offered by the Aragonese platforms for a stable connection, particularly the Zaragoza Platform. The Aragonese capital is already working on the arrival of merchandise on the so-called “Silk Train”, which will link the commercial Yiwu region (China) with Zaragoza, as well as the arrival of a new line to reinforce the commitment to connectivity and multimodality for goods transport, which is one of the hallmarks of the APL.

According to the secretary of the board of Chengdu International Railway Port and secretary of the Chinese Communist Party, Ren Zhiyong, Zaragoza could become a logistics centre for the connection in Spain with its terminal in the centre of China, provided that the Aragonese capital offers possibilities of cargo and the appropriate infrastructure. Currently, Zaragoza has the Plaza rail terminal (Adif), managed by the Chinese Noatum, and the Zaragoza Maritime Terminal (TMZ), which connect the city with the Ports of Barcelona, Bilbao and Valencia, among others; with 80 weekly rail freight connections.

An official delegation from Chengdu district and its logistics conglomerate, where 85 million people live, wanted to find out about the facilities at the Zaragoza Platform and maritime terminals and the commitment of the Aragon Government to logistics, as it appears in APL, the company presided by the councillor Marta Gastón. De la Fuente presented the Aragonese facilities, while also proposing first level international research and training by the Aragonese technology centres and the Zaragoza Logistics Centre (ZLC); and was optimistic in opening this new line of international connection and opportunities. The line connecting to central China, which crosses the entire Old Continent, would provide train connections “not only with China, but with Poland, Germany, and countries such as France, Holland, Turkey and Russia; and it would be of great interest for our companies to be able to send the goods by train to these places,” said the APL manager. Historically, all these destinations constitute the bulk of the exports from Aragon.

Thus, De la Fuente today signed a collaboration agreement with Ren Zhiyong, and the rest of the Chinese authorities present, to work and “promote the exchange in logistics” between the Chengdu international public terminal and APL. “Contributing to building a preferential connection between companies in this region of China and Aragon, as well as developing multimodal transport to connect the capitals of both regions” were some of the commitments made this afternoon. Agreements were also signed with the CFZ, by which opportunities for collaboration in the areas of research and training in logistics will be explored.

Aragón Logistics Platform already has the Yiwu platform as an associate, which connects with Nigbo, the largest commercial port in the world, and with which it is working on joint development projects.