Español English Français
You are here: Home / News / The Chinese group Cosco is interested in Aragon as a destination 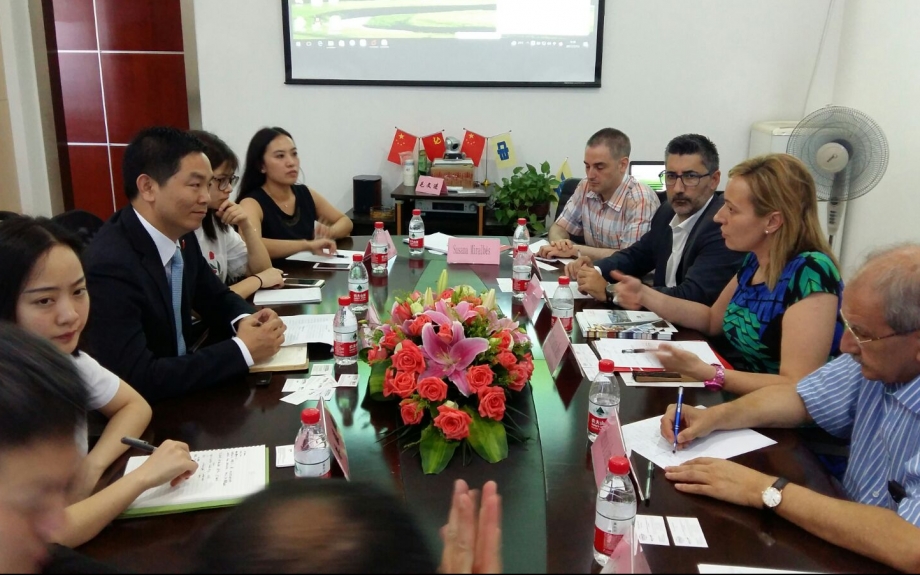 Councillor Gastón met the management of this company, which manages the Plaza intermodal platform since it bought Noatum, in Yiwu

The Chinese group Cosco, a shipping and logistics supplier company, based on the development of its terminals (maritime and internal), and current owner of the subsidiary responsible for the business of Noatum in the Plaza Intermodal Platform, is interested in studying new investments in Aragón linked to logistics. This was expressed this morning by the Cosco Shipping General Director at Yiwu, Yang Liang, following his conversation with the Aragon Government Minister of Economy, Industry and Employment, Marta Gastón, at the company’s headquarters in Yiwu as part of the official visit she is heading on behalf of the regional government. Cosco’s arrival in Noatum and Aragon took place only a few weeks ago.

“Aragon and Yiwu have much in common: a very advanced economy and their locations are very similar (within the country and very well communicated)” said Liang, telling Gastón that “Cosco has already embarked on several new operations in Yiwu and it would be very interesting to do them in Zaragoza.” In addition to the Plaza Intermodal Platform, the Cosco group manages the Valencia, Coslada (Madrid) and Bilbao terminals, and has a business running into millions extended throughout the world. This logistics and transport giant is present in almost 80 countries and in a total of 232 ports around the world, with a transport capacity of 81 million tons per year. In the port of Ningbao alone, Cosco manages the export of 1 million containers a year to more than 200 countries and has 332 open lines for maritime transport.

“They were pleasantly surprised by the possibilities of Plaza,” said the councillor after meeting the Chinese group management, “not only because of the connectivity of the platform and its facilities, but also for the volume of goods already moving in Zaragoza.” In her opinion, the renewed interest of the logistics corporation in Aragón “opens up a range of new possibilities for our international trade.” Gastón stated that the announcement that the next stop of the Silk Train would be in Zaragoza has also led them to think that, overall, “Zaragoza is interesting”. So the Minister of the Economy hopes that these expectations “can be realised”. She also insisted that this new channel of dialogue with the company has opened within the framework of the close relationship established between Aragon and the Yiwu Government.

Liang did specify that these options would not necessarily be linked to Cosco Shipping, but could be from other subsidiaries linked to logistics and to the supply chain in particular. In any case, Liang believes that “we have a very good future in the field of collaboration in logistics.”

Some of these activities could be tied to developments in the logistics chain linked directly by the merchandise moved by the so-called Silk Train when it arrives in Zaragoza.